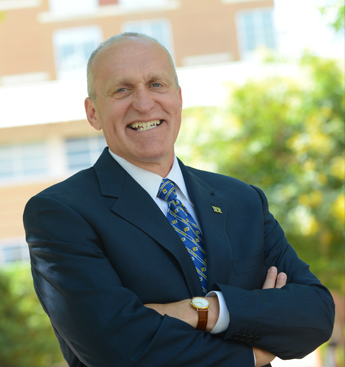 About the Chancellor Kim A. Wilcox

During his tenure, UC Riverside has seen historic growth across its education, research, and public service missions, including record improvements in student success, research funding, and philanthropic giving as well as the establishment of new schools of medicine and public policy.

Guided by UC Riverside’s long-term strategic plan, Wilcox has initiated an ambitious effort to grow the faculty and the campus’s physical facilities. Over the last four years, UCR has grown its faculty by nearly 200, while increasing the racial, ethnic, and gender diversity among incoming faculty members. Likewise, UCR has added or renovated more than 100,000 square feet of building space on campus since 2013 with another $1 billion in capital projects underway.

During Wilcox’s tenure, UC Riverside has become a national model for achieving student success, particularly across socio-economic and ethnic categories. In the past five years, four-year graduation rates at UC Riverside have increased by 16 percentage points and six-year rates by 5 points. UC Riverside is one of the few institutions nationwide that has eliminated graduation-rate gaps across income levels and ethnicity. In 2016, the Association of Public and Land-grant Universities (APLU) recognized this achievement with their “Project Degree Completion Award,” which goes to one university nationwide that has demonstrated innovation in student success. Under Wilcox’s leadership, UC Riverside became a charter member of the University Innovation Alliance, a collaboration of major public research universities in America seeking to improve student graduation rates and outcomes across all socio-economic and ethnic backgrounds.

Wilcox has been an active participant on a variety of higher education advisory boards and committees. He currently serves on the NCAA Presidential Forum and as a member of the board of directors for the Coalition of Urban Serving Universities. He serves as a representative of the University as a member of the Council on Competitiveness, a nonpartisan organization consisting of university presidents, CEOs, labor leaders, and national lab directors working to promote innovation and growth in the U.S. economy.

In 2021, Chancellor Wilcox received the Outstanding Senior Leadership Award by the Council of University of California Staff Assemblies. The award recognizes senior‐level leaders who are supportive and inclusive of UC staff, and encourage equity, diversity, inclusion, and community.

From 2005 to 2013, he served as provost at Michigan State. Previously, he was dean of the College of Liberal Arts and Sciences at the University of Kansas, from 2002 to 2005, and president and chief executive officer of the Kansas Board of Regents from 1999 to 2002. He also spent ten years as the chair of the Department of Speech-Language-Hearing at the University of Kansas.

A first-generation college graduate, Wilcox attended Michigan State University, where he earned a Bachelor of Arts in audiology and speech sciences. He also holds master’s and doctoral degrees in speech and hearing science from Purdue University. His research focuses on speech acoustics, and he has directed teaching, research, and service projects funded by the National Science Foundation and the U.S. Department of Education.